Adventure's on your doorstep!

An eccentric girl enters a world of magical monsters and decides to become a witch. Twins discover a mysterious journal in the woods near their great uncle’s house and delve into the world of cryptids the journal describes. Three friends get lost on an island filled with frogs and fight to find their way home.

Under the Neighborhood is a tabletop roleplaying game for 3-6 players using the Powered by the Apocalypse engine, where players live out adventures from their favorite Saturday morning cartoons. All you need to play are some dice, some friends, and your own imagination!

Whether you want to recreate your favorite episodes from The Owl House, Gravity Falls, or Amphibia, or you simply want to go on exciting adventures in a curiously ordinary world of your imagination, Under the Neighborhood is the game for you!

In order to download this game you must purchase it at or above the minimum price of $20 USD. You will get access to the following files:

Support this game at or above a special price point to receive something exclusive.

Can't afford Under the Neighborhood? Every time we sell the game on itch, a new community copy is added here. Feel free to claim one of these free copies of the game; they're here for you!

Under The Neighborhood is a suburban fantasy ttrpg inspired by cartoons from the 2010s (such as Owl House, Gravity Falls, Star vs The Forces Of Evil, and Amphibia.)

The PDF is 124 pages with quirky, appropriate art and a layout style that focuses on readability over pizzazz.

Under The Neighborhood is very beginner friendly, so if you've never thumped a Dungeons and Dragons book down on your kitchen table, you still won't be lost here.

Under The Neighborhood is also by the team that makes the Quest Friends actual play, so if you want an example of gameplay at any time, there's an extremely good podcast on standby. (The book's rules examples are a great illustration of the Quest Friends 'flail forward' style of play.)

In terms of GM and player resources, there's lots here. Characters sheets, premade characters, sample adventures, roll tables, and tons of help from the book throughout. There's also a solid, well-explained safety section and tools for designing your own content.

The core dice rules are PbtA. Everything is broken into Moves. You roll 2d6+Stat and get an uncomplicated success on a 10+. The GM has Moves as well, and acts in response to player failures. Crits exist, and the system overall is geared towards getting the players into zany, evolving situations.

Neighborhood compliments this with a bonus points system, called AP. AP charges up when you fail, get messed with by the GM, willingly help people you have friction with, or act in a way your playbook wants you to. In return, you can spend it for a ton of different metafictional effects, including temporarily unlocking parts of your character sheet, summoning npcs, or succeeding without rolling.

Character creation is simple and flavorful. You assemble your character from a playbook and a descriptor (a smaller, secondary playbook.) Then you get a lot of leeway to fiddle with that character, including revising them after you play your first adventure. Playbooks range from very normal (the Journalist) to quite weird (the Mon Trainer,) and have a lot of variety in their Move options, and usually at least two very different ways you could play them. Descriptors are more limited, but there's tons to choose from.

Combat (or other granular conflicts) are handled through a unique Confrontation system, which revolves around clocks (a la Blades In The Dark.) Essentially, players and foes make progress towards objectives, rather than chipping away at each other's HP. This keeps things dramatic while simultaneously avoiding a big, bulky combat engine.

Characters progress through Advancements, which are small but significant improvements that happen at the end of every X number of adventures. Advancements don't overshadow character creation, and this is definitely a system that works fine for one-shots, but they do provide a good sense of growth and progress in campaign play.

Overall, if you want a game of high energy, bright characters, zany happenstances, and some fairly deep emotional moments, Under The Neighborhood is a really solid pick. You *do* need to do your own worldbuilding (unless you're playing in the setting of Amphibia, Gravity Falls, etc,) but the system is adaptable and easy to learn, so building the world is basically the only heavy lifting you're doing.

Whether you're new to rpgs or you've been around for a while, if anything I've said here sounds like it might be your cup of tea, check Under The Neighborhood out.

Thanks so much for the review/comment! It's really nice to know what aspects of the game stick out most to a reader.

No worries! Thank you for writing the game! 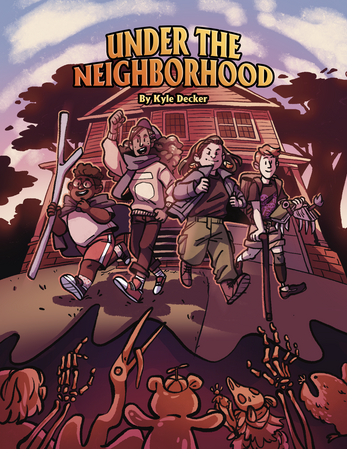 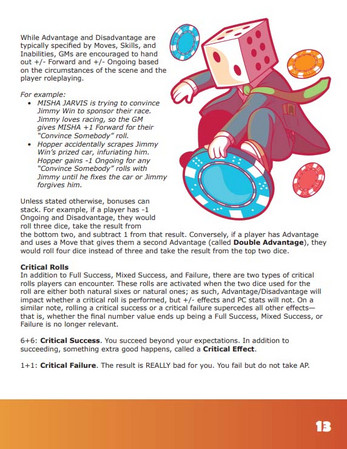 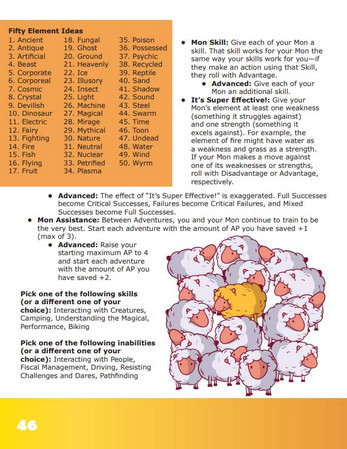 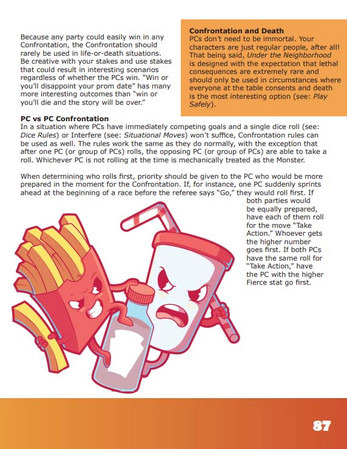